The question on everyone’s minds these days is whether the market is overheated or if it is different this time. It’s an uncertainty reminiscent of the banter during the 1990s stock market bubble; however, the technology bubble decade that peaked in 2000 may not be a fair comparison.

Is this déjà vu all over again? Maybe. Or maybe not.

We should be careful with the definition of “market.” There’s the U.S. stock market, which represents 50% of the MSCI All World Equity Index. Then there’s every other country in the world.

The U.S. market appears to be running out of steam; we’ve had a nine-year bull market in U.S. large-company stocks. (Yes, nine.) And again this year, the S&P 500 is up approximately 10% with several indications that large-company stocks domiciled in the U.S. are overvalued. As the chart below shows, the U.S. stock market cap, as a percentage of GDP, is as high as the 2000 technology bubble! 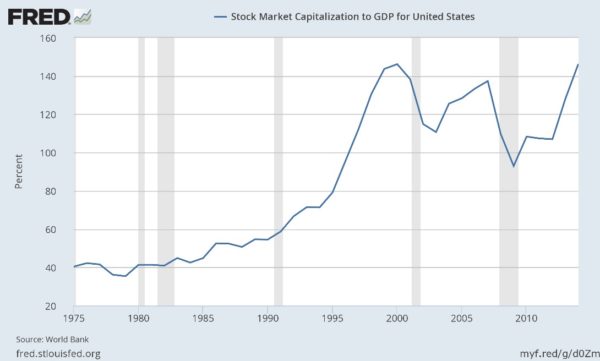 Moreover, the cyclically adjusted price-to-earnings ratio (CAPE), a popular valuation metric that uses current price and average earnings over the past 10 years, looks high at almost 30 times when compared to a historical average of 18 or so. 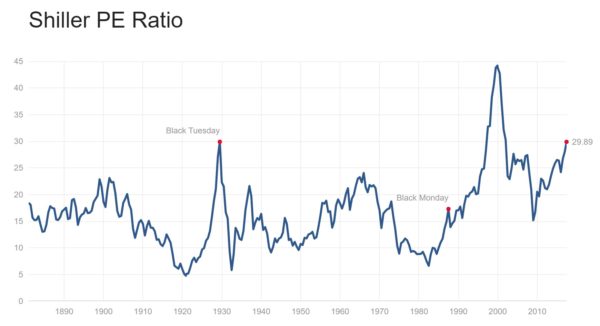 What this movement means

What to make of this? It’s hard to tell. This doesn’t appear to be the stock market bubble of the 1990s, when the CAPE metric reached close to 45. Also, despite the Fed’s efforts to lift short-term interest rates, they’re still very low. And long-term rates are barely budging this year (as evidenced by the 10-year U.S. Treasury government bond at 2.2%).

Rob Arnott of Research Affiliates has argued that a more informative approach to viewing the CAPE valuation tool is to control for the economic climate. Thus, based on his data, you would expect higher equity prices in a low-rate environment.

However, you see a much different story outside the U.S. The Shiller P/E (or CAPE) in developed international markets (e.g., Europe, Japan, Australia), hovers around 15 times ten-year average earnings. In emerging markets (e.g., China, India, Russia, South Korea), it’s even lower – at 13 times ten-year average earnings. Moreover, currencies outside the U.S. could add an extra tailwind to international stock prices because they’ve also been depressed by the strong U.S. dollar.

As Rob Arnott states in another article on emerging markets, “Long-term investors have a unique investing opportunity in emerging market assets given the very rare combination of cheap equity valuations, depressed currencies, and positive momentum in equity prices and economic fundamentals.” To further the point, Blackrock mentioned in their last research update that Eurozone equities are experiencing a strong earnings season, while the leading indicators of Eurozone growth are at multi-year highs.

Investing in this environment

The next question is how one should invest his or her money given this knowledge. Historically, when stocks have had long bull runs, they tend to be followed by long bear markets.

In my opinion, in moments like this, it’s even more crucial to venture outside companies domiciled in the U.S., especially given the uncertainty around valuations. Translation: invest in European, Asian and South America stocks.

One should view our stock market in isolation, considering stocks outside the U.S. have much more attractive valuations and haven’t had significant price increases (like U.S. stocks) over the past 10 years. It was a bit more difficult back in 2000 because U.S. and non-U.S. markets were both at record highs. That’s not the case now.

As always, markets are unpredictable and we truly don’t know how this will play out. Yes, U.S. markets seem high, but this could be justified by low interest rates and high profit margins.

Also, technology could be at play here. In 2000, the largest companies in the S&P 500 were GE, Exxon, Pfizer and Citigroup. Today, they are Apple, Microsoft, Amazon and Facebook. With inflation and wage growth at stubbornly low growth rates in the U.S., it could be that every company is becoming a technology company. You could argue that this is the case considering , workers are being replaced by machines and computers. This combined with outsourcing labor to other countries like China is allowing companies pay lower salaries.

Only time will tell whether the justification for higher stock valuations in the U.S. is warranted. This time could very well be different, but we’ll only know in hindsight. Therefore, a prudent, disciplined investor shouldn’t overreact by selling all positions in the U.S.

However, it does make sense to shift a portfolio allocation out of U.S. equities markets and pursue one closer to global weights. This means all portfolios should allocate at least 40-50% of their stock investments to companies outside the U.S. and most people can expect to see this in their portfolio.

It’s been a strong 2017 so far across global stock markets and the turn in non-U.S. stocks is especially noticeable. U.S. large-cap stocks are up 10% — outperforming U.S. small-caps (up 6%) and U.S. mid-caps (up 7%). However, international developed stocks (EAFE) are up more than 14%, while international small-company stocks and emerging-market stocks are up 17%. Additionally, value stocks are underperforming growth stocks in the U.S. by more than 8%. Although bonds are lagging a bit, they still have returned to almost 3% this year.

There’s never a dull moment, is there? Have a great summer and happy investing!