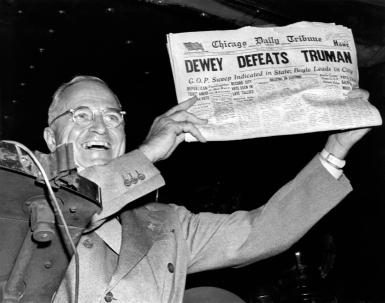 It’s not easy being human. Just when we think we have something figured out, reality shows us otherwise. Remember Thomas Dewey? Most people don’t; at least not by name alone. In 1936, a Gallup poll determined he would win that year’s presidential race by 4% against Harry Truman. Editors at the Chicago Tribune were so confident in the prediction that, the night of the election, they declared him the victor in their front-page story for the following day’s issue. Oops.
Predictions and forecasts can be useful, but they aren’t always right. Imagine all the time and money spent on industry consultants and pollsters for this year’s presidential election. Most were taken by surprise. Thousands of experts and millions of dollars didn’t predict the future.

Sound familiar? The investment industry has been down this road many times before. How often have we seen stock market prognosticators and forecasters fail miserably? Think of all the investment managers that allocate millions of dollars and thousands of “boots on the ground” to find the next stock that will produce superior returns. Despite all their efforts, the majority of these guys don’t come close to beating the market.

A good example of this occurred in the 1990s with a hedge fund called Long Term Capital Management. Its founders were top Wall Street investors and they had several Nobel Prize-winning academics on their payroll. The group thought they had forecasting licked and, for a while, it seemed like they did. They averaged over 35% per year for three years! However, in 1998, they lost $4.6 billion in less than four months, which sent them into bankruptcy.

You would think we would have learned our lesson, right? Yet, not even a couple of hours after Trump was declared the victor and all the political experts were humiliated, this writer had 20 emails and conference call invitations waiting in his inbox with subject lines such as: “President-elect Trump: What Does it Mean for Investing?” The goal: to provide “tips” on how to navigate this changing investment landscape.

CNBC has dubbed this new market shock “Trumpnomics,” which is flashing at the corner of millions of TV screens each morning. Others are calling it a “Trumpquake.”

Despite pollsters’ mishap earlier this month, active traders – or gamblers – haven’t changed their tunes either. They continue to be out in full force (and with their typical speculations about what the future holds).

The market has been responding well since the Trump win – defying pre-election predictions that it would collapse if he became president. Investors are expecting Trump and the Republicans to repeal the Dodd-Frank financial regulations so they bid-up bank stocks and the financial index immediately zoomed up 10%. In addition, due to infrastructure spending talk on the campaign trail, government debt is expected to increase substantially; hence, bond traders are selling U.S. bonds, driving up 10-year treasury yields from 1.8% to 2.25%. Trump also may repeal Obamacare so healthcare and pharmaceutical stocks increased. In addition, Trump is expected to impose tariffs and encourage protectionism, so emerging-market stocks (e.g., China, India, Brazil) have been hit hard.

Time will tell what he’ll actually do – and what Congress and the Senate will allow him to do. In the meantime, as I always say, ignore the noise. Close your ears and remain steadfast with our long-term, value-driven approach to investing.

The same people who were just espousing pre-election day about how Trump’s anti-trade, anti-immigration policies would hurt capital markets have made U-turns and suddenly are acting bullish. What changed? Nothing really. The herd just decided to go the other direction; probably led by some well-respected market analyst. It’s a guessing game that astute investors should ignore. Famed Professor of Finance Jeremy Siegel says Trump will have to be flexible because Republicans have a smaller majority than under Obama and they aren’t united on many of his proposals.  Translation: the proposals championed by Trump may not happen or could be altered dramatically. Consequently, these “bets” traders are making may or may not pan out. They’re precisely that: bets.

Again, we’ve been down this road before. Remember Brexit in June? Markets quickly recovered. Yes, the British pound has weakened dramatically, but as a veteran of currency markets in a past life, I can tell you that this herd mentality is stronger in the currency markets and we’re already seeing the pound recover.

Even if Donald Trump does “Make America Great Again,” one cannot assume that will translate into stronger stock market returns. For example, taxes may drop, but import duties could increase. That could spark a trade war with China, Apple’s largest market for iPhones.  It’s challenging for any person or model to account for all these variables.
What should we do? Thankfully, unlike voting, we don’t have to put all our money on one horse.
The game of investing, like the game of life, is all about probabilities. We take risk to achieve a goal, while hedging against the improbable outcome. Interstate 285 in Atlanta, Ga., is one of the most dangerous highways in the U.S. based on deaths per mile. I take this highway weekly to get to my destination as quickly as possible. It’s a risk. I could have a serious accident; not probable, but it could happen. I reduce the odds of this happening by doing several things: wearing a seatbelt, abstaining from drinking, and driving at slow speeds.

We do the same thing with investing. We try to achieve a high return while, at the same time, avoid the improbable event. We do this by:

Timing the market and forecasting trends are virtually impossible – and a wasted exercise no matter how many people and how much money you throw at it. However, spreading your money out among different asset classes and using strategies backed by strong academic research will significantly increase your odds of achieving your retirement goals. Stay invested. It should be interesting over the next several months.